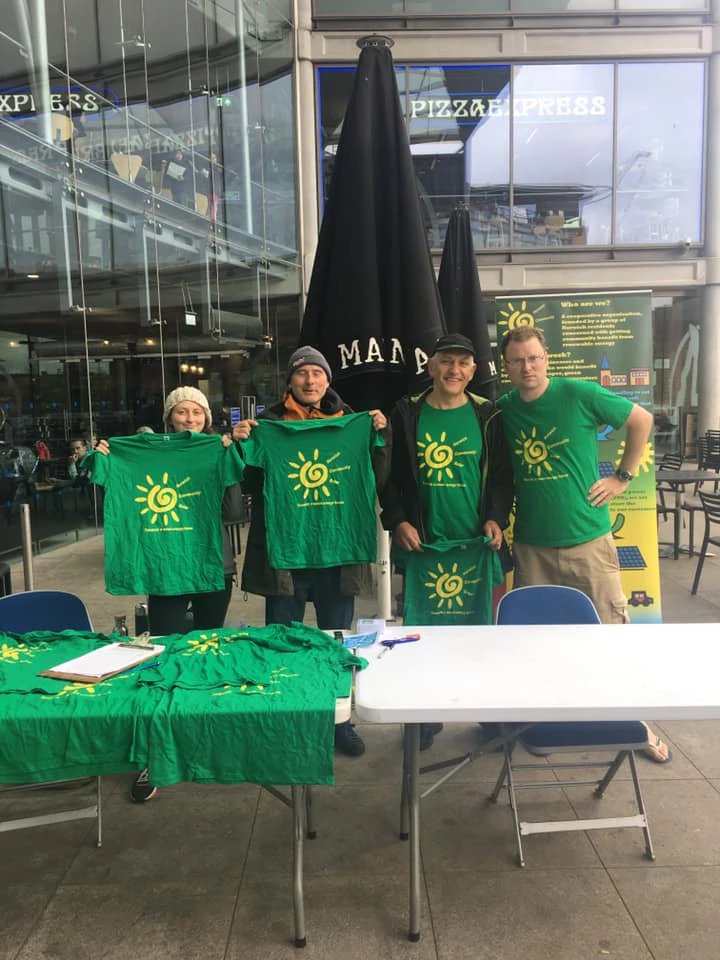 June was a busy month for Norwich Community Solar members as we attended three events concerning sustainability and the environment. Our main event was to meet people entering the Forum where the One Planet Norwich eco-fair was being held on a rather cold, wet and windy day. Despite the poor weather, there was a great turn-out and we were able to connect with a diverse range of people who came to ask us about what we were doing.

We also found there was a number of concerns raised, including the way climate change was affecting the local weather and how things would become for the young in the future. Our aims to become successful in offering local people a chance to act on these concerns were met with an overwhelmingly positive response, reflected in the jump in our membership by 11%, taking us from 55 voting members to more that 60.

This was augmented by the efforts of others members who represented us in the local Quaker Earth Care Fair which was running on the same day in the Quaker meeting house. Here, an assembly of climate change and peace groups mixed with recycling, re-using and Traidcraft groups promoted their themes as well as enjoyed vegetarian and vegan food that was on offer from other stalls.

We also attended the Permaculture East annual gathering which was being held on the outskirts of Norwich for three days. Our Chairman, Nigel Hargreaves, gave a talk to an audience of 25 permaculture enthusiasts on community energy as a social enterprise and how that could integrate well into a broader spectrum of related social enterprises ranging from sustainable food production to transport and environmental protection. All of these would align with actions to address man made climate change forcing which as we know has been accelerating due to the release of carbon dioxide into the atmosphere from our burning of fossil fuels while undermining Earth’s natural resources to remove it.

At this meeting we discussed the possibility of forming a community social enterprise and campaigning hub based in Norwich, where we could network our efforts and leverage our expertise and resources to support one another in becoming more effective forces for change. We thought it would be worth seeking a premises, possibly an unused local authority building to renovate and become the rallying point. In addition to it becoming a focus for our individual organisations through sharing work space and ideas, it could develop to offer advice through an ‘energy cafe’, on topics such as how to find clean energy and become more energy efficient. It would be a place for learning more about the needs of our community within our varied remits and sharing with others about what we are doing. If this idea were to become a reality in future, we agreed it needs a champion to carry it forward, so if anyone is moved by this vision please do get in touch through our contact email to begin with.